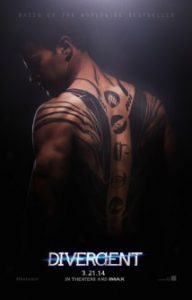 Tonight, I saw Divergent at the Marcus North Shore Cinema.  Divergent takes place in a dystopian future where society is divided into five factions, based upon their virtues.  Abnegation is selfless, Dauntless is brave, Erudite is intelligent, Candor is honest, and Amity is peaceful.  Your occupation is dictated by your faction.  When you reach the age of 16, you undergo a test that determines what faction you should be in.  You then pick what faction you will be in for the remainder of your life.  The divergent are those who receive an inconclusive result on the test.  The movie follows the story of Tris, who discovers that she is divergent.

It is incredibly hard to look at this movie without comparing it to the Hunger Games, and I do not just say that because Lenny Kravitz’s daughter is in it.  Despite the parallels, I think that it is much more than another Deep Impact.  It had an enjoyable storyline, good character development, and a reasonable pace.

I think that it was one of my favorite films in a while.  I would say that it is more than worth the cost of admission.