For the past few years, I have been using an unlocked Samsung Galaxy Nexus on Straight Talk.  Straight Talk is a MVNO that offers service on your choice of AT&T‘s network or T-mobile‘s network for much less than either provider charges.  When I switched to them, I was able to reduce my monthly cellphone bill from ~$120/mo to less than $45/mo without any noticeable degradation in the service.

Roughly a year ago, I started hearing about a new company called Republic Wireless.  When they first launched, they offered a $19/mo unlimited plan that was available solely on their one phone.  That one phone proved to be too high of a cost for me.  It was an old gingerbread phone that struggled to handle basic tasks.

Fast-forward a year and now Republic Wireless is offering Motorola’s new Moto X.  They also added more tiers of service, ranging from $5/mo to $40/mo, depending on how much you are willing to offload onto your WiFi network.

Republic Wireless calls itself a hybrid carrier.  You are tied to particular models of phones because their phones first try to use available WiFi networks for voice, text, and data transmission.  The phone only uses the cellular network if no WiFi networks are available.  In order to do this, the phone needs to have a special, modified ROM.  Since the overhead (on their end) is minimal while the phone is using WiFi, they are able to charge less.  The cellular network they use, while WiFi is unavailable, is Sprint.  Sprint is not the best cellular network in southeastern Wisconsin but it is very usable. 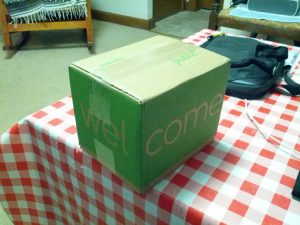 Republic Wireless charges $299 for the Moto X, without putting you into a contract.  That is an interesting prospect.  You can not look solely at the price of the device, though.  If you are going to spend $899 (service + hardware) over 24mo on the device, it should fully do what you need it to do.  The carrier’s Moto X runs Android 4.2.2 (not KitKat).  This is less of an issue, though, since it also offers Motorola’s custom helper software. 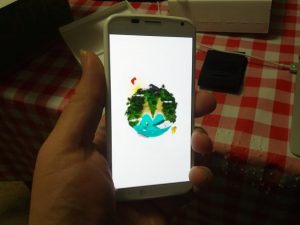 The phone really does a great job at knowing what you want it to do before you ask it.  If you pick up the phone from a table and look at the screen, it will show you the time and any notifications.  If you are in bed or in a meeting, it will silence the phone but allow it to ring if it thinks it is an important enough call.  If you are driving, it will give you messages vocally.  It is truly impressive.

On an early day with it, I tested the battery under very normal conditions.  I was listening to either a podcast or music over it for the majority of the time.  I was taking regular videos and pictures.  Under this load, I was able to get a solid 10.5hrs out of the battery.  The company claims that you can get as much as 13hrs out of it.  Even at 10.5hrs, it is very acceptable.

The biggest benefit is that I will be saving $531 ($1430-$899) over the course of the phone’s 24 month lifespan.  I also, though, have the benefit that I can use the phone to make calls on any WiFi network.  This means that it will work in a subbasement in Milwaukee or at a restaurant in Paris without extra expense or problem.  This is more powerful of an idea than I originally thought.

The hardware is very competent.  The 10mp camera is light-years beyond my old Galaxy Nexus.  I have been fascinated by the slow-motion video feature, also.

It lacks the ability to do photo spheres.  I absolutely adored photo spheres.  I am truly sad to see it missing from the phone.  I also dislike the idea of not running the latest version of Android.  When I switched to this phone, I went from a 4.2.3 phone to a 4.2.2 phone.  That should not be a compromise that you are asked to make.

While the hand-offs from WiFi calls to cellular calls aren’t generally a problem, I have seen occasional issues.  The phone tends to be “optimistic” about the WiFi network at work and in the driveway at home.  I have learned to expect these situations and adapt.  If I think there will be a problem, I will just turn off WiFi before I make the call.

I think that it is an excellent option.  I really can not think of a reason why anyone should stay with one of the big carriers, over Republic Wireless.  The phone is very acceptable and the price is very good.  I do wish they would be able to offer Nexus devices on the carrier but I do not think it would be practical.  The network is very usable (especially while using strong WiFi).

I did discover that (despite what Sprint’s coverage map says) there is some 4g LTE coverage within Milwaukee.  I’m still looking at the idea of paying the extra $15/mo for 4g service but I probably won’t.  It is an option, though.