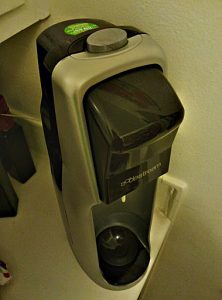 Roughly two years ago, I bought a Sodastream water carbonator.  The Sodastream machine allows you to force carbonate water and then either drink it plain or add syrups (that the same company makes).  At the time, I was doing two things: drinking unhealthy amounts of energy drinks and moving to drinking carbonated water instead of soda.  I saw the Sodastream machine as a way of reducing my per unit costs for both and giving me flexibility regarding what I have in my energy drinks.

So, you may be asking yourself the same thing I was in the beginning: where is the break-even point is?

Lets figure it out using current costs (versus what I was paying 2 years ago).  Bed Bath & Beyond has an average looking Sodastream machine for $100.  The same store has jars of syrup for “Diet Energy Drink” for $6.99.  According to the bottle, a jar is enough for 12 liters of finished product.  The machine is sold with a CO2 canister but it is only capable of carbonating 60 liters of finished product.  You can take empty CO2 canisters back to the store and exchange them for full canisters.  The last time I did that, it cost $16.95 (at Sur La Table).  The machine only works with Sodastream bottles but one comes with the machine, so lets assume you are just using the one. 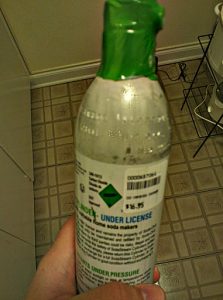 More likely than not, your break-even point would be slightly different, depending on your preferences and habits.  By the way, I have noticed that the Sodastream diet energy drink doesn’t seem to have the same “kick” as the commercial stuff but I do like the taste and it does keep me going.